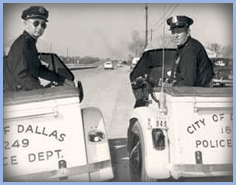 The DPA was formed in 1959 by a small group of courageous officers who recognized the need for Dallas’ officers to have a voice and representation in issues that affected them. Threatened with discipline and retribution, these officers persevered and laid the foundation upon which the Association was built. The early days of the Dallas Police Association were not easy for its members. The City government viewed the formation of the Association as a unionization of the police force.

Early DPA members suffered the denial of promotions, transfers to better assignments and even dismissal from the Dallas Police Department as retribution for their Association membership. Despite these hardships, the DPA continued to grow, by focusing on its important mission of representing, supporting and protecting its members; just as it does today.

George E. Butler was the first President of the DPA and served in that capacity until 1964. Butler was a Supervisor in the Intelligence Unit and spent much of his career handling high-profile cases involving the notable and notorious. He worked many cases involving organized crime and gangsters; and was also part of the investigation of the assasination of President Kennedy. As with many of the DPA’s founders, Butler was branded a radical by city leaders for his organizing efforts. He was in fact a visionary, who guided the DPA through some of its most formative years. George E. Butler, the first president of the DPA in 1959. The Dallas Police Association headquarters building has been named “The George E. Butler Building” in his honor.

To Command is to serve, nothing more and nothing less. —Andre Malraux

NEP IS A UNION WORKPLACE!